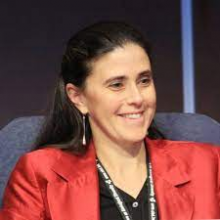 Anne-Hélène Prieur-Richard has 15 years' experience in biodiversity and sustainability science-policy-practice interface in addition to 5 years in research.

Between 2006 and 2014, she was Deputy Director and then Executive Director at DIVERSITAS, the international programme on biodiversity sciences of ICSU and UNESCO. In 2015, she became Director of the Future Earth Global Hub based in Montreal, Canada.

In 2018, she joined the French National Research Agency (ANR), Paris, France. She is in charge of the strategic representation of the agency in several international and European initiatives (e.g. Belmont Forum, European Joint Programme Initiative on Climate) before being appointed as Head of Department Environment, Ecosystem, Biological Resources in June 2021.

She has also teaching experience in France (University of Montpellier and Paris), and was Affiliate Professor at Concordia University, Canada.