Dynamic Mapping of Tropical Wetlands and Inundations with CYGNSS

The Cyclone Global Navigation Satellite System (CYGNSS) has acquired reflected GNSS data everywhere in the latitudinal band +/- 38 degrees since the spring of 2017, making it possible to produce maps of peak reflected power, properly corrected (NSNR) for instrumental and geometric effects.In the presence of water, even obstructed by vegetation, the reflection in  the forward direction is very strong, resulting in high values of SNR. These constitute a proxy for  the presence of water on the Earth’s surface.

The group previously worked with CYGNSS data to increase understanding of scattering mechanisms in heterogeneous water scenes and developed a wet-dry classifier based on SNR to generate dynamic maps over the Everglades. Their analysis shows that dynamic changes can be monitored over small spatial scales at reasonable accuracy. Moving forward, they aim to apply their analysis and retrieval algorithms in support of the needs of the Applications community and explore the benefits of the CYGNSS data for use by practitioners in decision making. 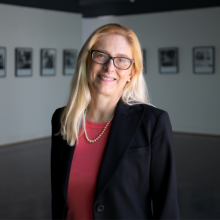 Dr. Cinzia Zuffada joined NASA’s Jet Propulsion Laboratory (JPL), Pasadena in 1992 and has been the Associate Chief Scientist since 2007, playing a key role in the development of institutional programs and in managing internal R&D investments. Additionally, she oversees a number of programs supporting research collaborations between JPL and the academic community.
For over twenty years, she has led the pioneering Global Navigation Satellite Systems reflectometry technology development at JPL and has played a pivotal role in demonstrating the feasibility of the technique for ocean altimetry and land hydrology remote sensing. She is the Principal Investigator of two NASA ROSES awards based on the application of the data from the NASA CYGNSS constellation and is a member of the competed science team. She has been active internationally in the development of the GNSS-R community and is currently a member of the SRB of HydroGNSS, an ESA Scout mission.
Dr. Zuffada has a Doctorate of Engineering degree from the University of Pavia, Italy, where she was a Research Faculty in Electromagnetic Fields Theory before moving to the US. She received the Theresian Medal from the University of Pavia in 2002 and is a member of its academic senate. She is the recipient of the 2014 JPL Magellan Award and the 2015 NASA Outstanding Leadership Medal. In 2016 she received the Knighthood of the Order of Merit of the Italian Republic and the Ghislieri Prize in 2019 in recognition of her career.
Dr. Zuffada is active in outreach activities, with particular focus on strengthening collaborations/cooperation between the US and Italy in research and has been a Science Fellow at the US Embassy in Rome in 2019. She serves (as a volunteer) as the president of the Italian Scientists and Scholars in North America Foundation, a non-profit network of researchers who endeavor to foster transatlantic synergies in research and innovation.