"Today, no area on the planet is left untouched by plastic pollution, from deep-sea sediment to Mount Everest. The planet deserves a multilateral solution ­that speaks from source to sea. A legally binding global agreement on plastic pollution will be a truly welcome first step."

Around the globe, plastic waste is accumulating at an alarming rate from source to sea. According to the UN Environment Program (UNEP), we produce about 300 million tonnes of plastic waste every year estimated to be nearly the weight of the entire human body and up to 50 percent of plastic waste is single use - used once and thrown away never to be used again.

The history of plastic has been rapid. Between 1950-1970, plastic was in its earliest stages of application, production, and use. During the following two decades, the level of plastic production and consumption more than tripled. By the turn of the century, the amount of plastic waste generated rose more in a single decade than in the previous 40 years. At this point, plastic pollution poses catastrophic risks to flora, fauna, and human health; it also contributes substantially to the pace of climate change. More than 99 percent of all plastics are made from natural gas and crude oil.

To compound the already staggering impacts from plastic production and waste, plastic pollution disproportionately affects marginalized communities and people living close to plastic production and waste facilities, as well as oil and natural gas extraction sites. While ranking lowest on the list of plastic consumption per capita, many less developed countries accept plastic pollution waste from high-consuming nations for near-term economic gains, while suffering the long-term impacts presented by serving as the world’s keepers of plastic pollution. The risk to ecosystems only worsens because plastics stay in place and micro- and nano-plastics seep into so much of the environment including soil, air, and water. Plastic particulates have been confirmed in glacial ice and soils in the most remote places in the world. Indeed, plastic pollution is becoming ubiquitous with the Anthropocene. The era will be known for human ingenuity and innovation, including the irony that some innovations, while providing many benefits, en masse are contributing to the Sixth Extinction. 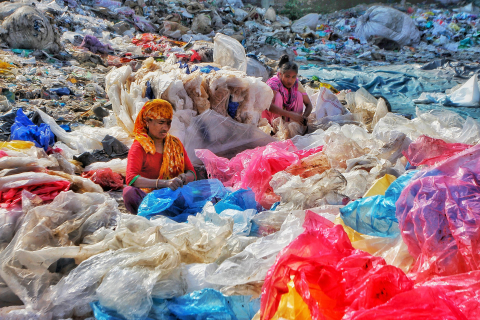 To further understand the challenge the world faces to address and manage plastic pollution, according to the World Population Review, the following 10 countries have the highest rates of plastic pollution in 2022:

The resumed fifth session of the United Nations Environment Assembly (UNEA 5) was held in Nairobi, Kenya from February 28 - March 4, 2022. The overall theme for UNEA 5 was Strengthening Actions for Nature to Achieve the Sustainable Development Goals and emphasized that nature underpins our societies and we need to protect and restore our world.

During UNEA 5, there were two declarations, 14 resolutions  and one decision adopted by the UN Environment Assembly, including the historic outcome made by 175 member states to pass the End Plastic Pollution resolution that initiates a process by nations to determine an internationally-binding agreement to end plastic pollution by 2024. In addition, UNEA agreed to create a science-policy panel to contribute further to the management of chemicals and waste and to prevent pollution.

The End Plastic Pollution resolution requires an intergovernmental negotiating committee (INC) to develop an internationally legally binding instrument by 2024.  The resolution recognizes that plastic pollution poses risks to human health and is a threat to the planet’s biosphere. The resolution underscores the imperative role of industry to ensure that the entire life cycle of plastics is addressed. UNEP Executive Director Inger Andersen referred to the resolution as the most important international multilateral environmental deal since Paris.

The resolution specified the need to strengthen the science-policy interface at all levels and raise awareness of the global impact of plastic pollution to the environment. The Global Council for Science and the Environment (GCSE) is an accredited organization of UNEP. As an accredited organization, GCSE is actively engaging with UNEP to determine the most effective process to engage the scientific community and expertise to contribute to the next steps of the End Plastic Pollution resolution. Given the mission of GCSE to improve the scientific basis of environmental decision-making, the End Plastic Pollution resolution offers a real-time opportunity for GCSE member institutions of higher education to contribute to countries’ abilities to establish readiness and comply with the terms of the treaty once it is entered into force at the beginning of 2025.

On April 5-6, GCSE led an international summit on plastic pollution together with the French Embassy Office of Science and Technology, and longstanding GCSE member Long Island University. This Summit is a first step by GCSE to engage in, and support the anticipated success of nations to participate in the End Plastic Pollution work to develop a legally-binding treaty to effectively curb the pace of plastic pollution, most especially single-use plastics, around the world. To learn more about this work and to participate, please visit: https://www.gcseglobal.org/international-summit-plastic-pollution.

Opinions expressed in this essay are those of the authors. They do not purport to reflect the opinions or views of the GCSE or its members.